20 years ago I lost the person I loved most in the world, Ted. He was my best friend, made me swoon when I saw him in his tux, and was the most witty and charming guy I had ever met. He was a ball of contradictions and complications but that made him all the more interesting and when he died I was devastated. In my twenties I couldn't imagine being in my forties and being OK. I mean I knew of course life would go on but I couldn't imagine how I would ever get over the loss. 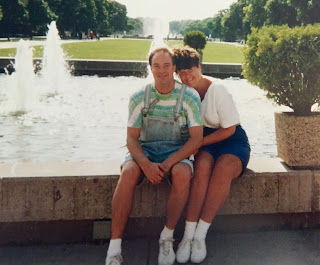 I have. Mostly. My Ted-ache is less stabbing, less all encompassing. I hated the saying but now I do agree: time heals all wounds. Never fully mending but at least thankfully not heartbrokenly open and gushing. Bearable. Not that I don't still miss him all the time or get mad at all he's missing out on. He would love how cool technology has become and would for sure own an iPhone. He would enjoy watching Suits with me. He would love Millennium Park.

Twenty years is a long time ago now and yet it went by really fast. I can only actually feel how long ago it is when I see pictures of how young we look. Although even looking at pictures of myself now I can't believe I am twenty years older. That's what time does-- it seems to creep by but really it goes by all too swiftly.

Now when friends get upset about anything I sometimes have been known to ask:


Is anyone dead? and Will it really matter in 5 years?

Because when you lose someone, and I have lost two of the men I loved, a lot of things seem silly to be upset about. Not that I am above diving into drama when I'm tired or annoyed or have forgotten... but I almost always catch myself because I never want to get separated from how fragile life is that I let something really stupid get me down. 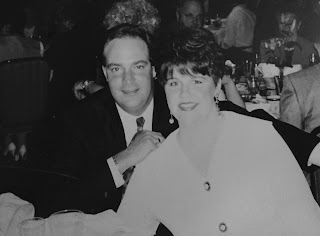 I don't think of Ted every day now. Sometimes I don't even think of him weekly. But when the moments come they can be intense... but, then they pass. And I feel how lucky I am to have known him. To have laughed with him. And to selfishly be happy for another day to miss him. He wouldn't want me wasting too much time mourning, he wanted me to live a great life. I'm trying. And when I feel sad I know every year it gets easier to be with the sadness. Not because it's not there but because I'm stronger and I have healed the heartache a little with each passing year.

If you are sad about anything I hope you're getting strength and peace from wherever you can. And my wish is that time will help heal you too.
at 7/23/2015 1 comment:

It is with unbelievable excitement that I announce my book, which was originally published in 2007 and in hardcover, is getting new life and is coming out in
PAPERBACK!!!!

I can't explain the exact reason for my good fortune but I got an email a few weeks back from my new editor asking me to approve the back cover for the Fall 2015 release. It came as a complete shock and I literally jumped up and down at the news and when I confirmed the new release date, October 13, 2015, with my agent I was still in shock.

Here's the thing, my book was not a bestseller by any means and I was always so grateful it got published in the first place- even though the conversation is timeless- that I had quietly accepted it had been sold out for a few years and it had run its course. Funny my dear friend Vickie always believed it had not even begun to hit its stride and would still introduce me as her author friend with this fabulous book even though I had no actual books left to sell.

Ok now for the really woowoo part: my new editor's name is Trish which is my Mother's name. I am not an otherworldly believer but even I got chills at the timing and the coincidence. My Mother loved this book so much and even though I had done some pretty-decent things in my life she was never more proud then when it came out and would always introduce me to her friends and colleagues as her daughter the authoress (which I thought she made up but turns out is actually a real term).

Is it because of the timing that corresponds with the debate going on in the nation around brave and amazing Brittany Maynard? Brilliant and adorable Atul Gawande making the thought provoking and personal Being Mortal a hit? Is it just random that there was a slot for death and dying that MLW fit into? Is it my Mom influencing the publishing world from above? Who knows?! I'm just thrilled that my little book (my baby) has been given new life, will reach more people, and will allow me to continue to discuss this extremely important topic.

A Favor: Now here's where I hope you'll join in. Social media is huge now, unlike back when I was launching the book the first time, so I would love your support in anyway you see fit. Have any connections with bloggers, media outlets, bookclubs? Please introduce me. Have suggestions of any other kind, I'm all ears. Want to pre-order some for your whole family? Aw shucks, that's so nice of you

THANKS! I want to thank all the people who helped me on my first journey, the readers who bought the book and shared it with others, my agent extraordinaire Laurie Abkemeier who took a chance on me, the people at HarperCollins who have taken two now, Anne Cole Norman my awesome original editor, Trish Daly my delightful new one, and all the mysterious forces that have gone in to bringing this about. As you can see on my face above, I could not be more excited!

I'll keep you posted... and in the meantime have a really great Summer!