Men Need Friends: Who's Your Sundance? 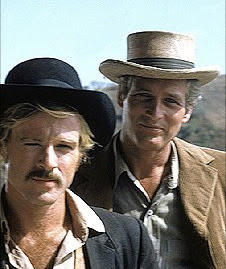 Twice this week I cried over deep friendships... not mine, but those of some men I don't even know. It started when I was watching Paul Newman and Robert Redford's episode of Iconoclasts. Hearing them talk about their deep bond and how because they could lean on each other they could get beyond Hollywood egos and life's other issues and create a gift (Newman's Own, Sundance) to share with the world.

Then I got choked up listening to an interview (last 5 minutes of part 2) between Marc Maron and Louis CK talking about how they used to be best friends until jealousy tore them apart. Here are just a few snippets from Louie trying to explain how he felt:

I could have used you, I got divorced, I got a show canceled, I had some tough times I could of used a friend. Those times that were making you jealous, I was struggling, I was having a hard time.

Here is something I don't think most men talk about: their need to have a close male friend. And I'm not talking a beer or golf buddy, I'm talking someone who you can talk to about anything. I was not familiar with Marc Maron and have only recently started to really love Louis CK, yet I was still unbelievably moved by how they both needed each other but were too stubborn/ jealous/ insecure to really reach out. (Warning: Louie is not everyone's bag of tea. My sister could not even listen to a full minute of him because of his language- salty. But his everything's amazing and nobody's happy bit on Conan is safe for all.) The thing I've noticed with my male friends is that they have a hard time with deep communications in general and especially if they are feeling lost or struggling.

Recently one of my oldest pals called me to apologize for how crappy of a friend he had been. He was going through something and realized he had no one to talk to about it. When he went to call me he said it hit him how he had spent the last decade focused solely on his work and totally not thinking of other people outside his immediate family. I have no real friends- who would even say anything at my funeral?

A little dramatic, but probably kind of true. This is especially true once guys get out of their 20's and start to have families and focus heavily on their careers. Unlike most women, men can often rely exclusively on their spouse for the only intimate relationship in their lives. But if there is something off in that relationship or if they feel like they aren't succeeding there, they can feel alone in the world. One of my close girlfriends is going through a divorce and her ex is being a total ass. Still I found myself trying to explain his actions because I knew he was doing stupid stuff because he had no one else to lash out at and no one to talk things through with.

I have known men who have cheated on their wives/girlfriends and the reason: to connect with someone. Sure there is the bonus of sex, but mostly that too is tied to a release from feeling stressed, confused, unimportant, like a failure, etc. Executives, celebrities, athletes, average Joes, all need to have someone who can listen and relate to them. Like Louie said:  I had some tough times, I could of used a friend.

So Guys don't wait till you are in a bad way, reach out and make a friend, be a friend, repair a friendship... because everyone needs support, everybody does.
at 10/08/2010